Time flies when you’re having fun; there’s no other way I can describe the past month! Several of my friends are on the hall committee, and consequently I’ve been involved in helping with some hall events recently.  I also spent the first three weeks of April rehearsing for a performance with the Gilbert & Sullivan Society, which was an amazing experience.  I met dozens of fun, interesting, and incredibly talented people and got to formally sing for the first time this semester.  Though it was a bit hectic learning over a dozen songs in about 2.5 weeks, every moment was worth it.

The performance itself went so well–I was struck several times on- and off-stage by the energy and joy radiating from everyone in the cast.  I challenged myself musically, as I had previously sung very little G & S.  In addition to being a member of the chorus, I was Marta in “Do Re Mi” from The Sound of Music, Mona (“Lipschitz”) in “Cell Block Tango” from Chicago, and Edith in “Climbing Over Rocky Mountain” from Pirates of Penzance.  My biggest challenge, though, was getting ill a couple of days before dress rehearsal.  I woke up the morning of the performance with a cough and barely any voice; I proceeded to spend the entire day drinking tea, eating spoonfuls of honey, and trying not to talk.  It turned out so, well, though, and the audience was incredibly receptive and engaged.  Owl Eyes, the student magazine of St Andrews, published some photos here: http://www.owleyesmagazine.com/gallery/night-musicals.

A few days after the performance, I had a paper due for my Scottish Music module.  The day it was due was one of those gorgeous Scottish summer days that make all of the cold, rainy ones entirely worth it.  Unfortunately, I was stuck inside sick and trying to write a paper.  My academic dad decided that I needed a break from my essay, so he came over after dinner and brought Ben & Jerry’s ice cream and some excellent music.  We went outside and swing danced barefoot in the grass for about an hour, taking a break to enjoy some ice cream.  It was by far the best study break I’ve ever had!

I’m not sure that I’ve explained academic families yet, so let me do so now.  Academic families are a St Andrews tradition; upperclassmen (some starting in 2nd year, others in 3rd or 4th) “adopt” incoming freshers during the first weeks of classes.  JSAs and JYAs (Junior Semester or Year Abroads, aka study abroad students) often get adopted as well.  Some people adopt singly, others choose to adopt with a friend of the opposite sex like my “parents” did.  My mum is my English friend, Laura, who is going into her 2nd year as the president of Swing Dance Society.  She’s so wonderful!  My dad, as I mentioned above, is my Belgian friend, Lawrence, who is treasurer, and now vice president, of Swing Dance Society.  He’s pretty great, too.  I met both of them through dancing, and most of the time when I see them that’s what we’re doing! 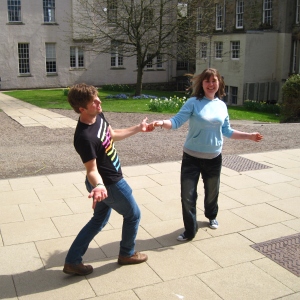 Lawrence and Laura, my academic parents, swing dancing outside of the Library

another angle; we were selling tickets for our ‘600 Minutes of Swing’ Speakeasy.

Another highlight of April: I cooked, by myself, for the first time!  Though I’ve done a good amount of baking in my life, I never did much cooking before I came to St. Andrews.  But we have to fend for ourselves every Saturday and Sunday evening for dinner, so we do a lot of cooking in the hall together.  In the middle of a paper for psychology, I decided that my break would be to challenge myself and cook solo.  A friend picked up some groceries for me while in town and I made myself some chicken fajitas.  I was so surprised–they were delicious!! I wish I had access to more spices here, but I thoroughly enjoyed it (as did a few friends: I made way too much for just myself!). 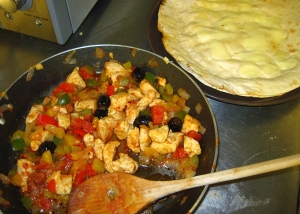 My first time ever cooking by myself was a success!

I’m off to go meet with a professor, but I have so many more stories to tell you (like dancing for 10 hours straight)! And don’t worry, I promise I have not forgotten about sharing photos and stories from my Easter holiday travels.  I will write soon; it’s week 1 of revision and I know I will want study breaks!