This Saturday, Erskine hosted its 175th birthday party. There were events such as ghost tours, a silent auction, a fire performance, the Erskine homecoming soccer game, and so much more. I wish I could write about everything that was going on that day, but unfortunately, I only did about half of the activities.

I began my day as an Erskine Student Ambassador. The Admissions Office hosted an event for prospective students and all of the Student Ambassadors were paired off and were put in charge of a tour group. My tour partner was my sophomore friend, Kasey. 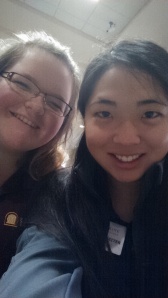 We gave a tour to a group of 5 families and I felt so lucky to have Kasey be in charge. Since I’m a freshman, I’m still learning what I need to say on tours and how I need to say it. Kasey glossed over whatever I missed in an easy and informative manner. Basically, I’m saying that we rocked our tour.

After the tour, I headed to Erskinefest with my friend Grace. We were both starving, so we rushed to be one of the first people in line for lunch. At lunch, we met up with our friends John and Ives.

After we finished eating, we went to pick up passports that had the schedule of events on one side, and fifteen different opportunities to get stamps on the other side. Erskine students with five stamps could get Convo credit for the day, and anybody with 5, 10, or 15 stamps could be a part of a drawing for a prize that would take place at the end of the day. I had the small job of giving out one of three special stamps during the early afternoon. My stamping improved so much by the end of the day. 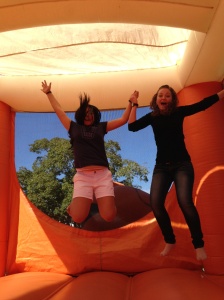 After we left the bouncy castles, Grace, John, and Ives left to go do more activities while I spent time with my family. My parents and my older brother came to Erskinefest in the middle of the afternoon. We spent a little time at Subway, but then looked at the Archives in Reid Hall, climbed the towers in the Erskine Building, attended the Erskine men’s soccer game, and watched the parade of floats go down Main Street. Erskinefest was already a lot of fun, but it was even more fun to experience it with my family.

My wonderful parents and me in the Erskine Tower

Finally, to conclude my day, I got to see a fire performance and then I danced with my friends to the music by The Fantastic Shakers. Let me just say that THE FIRE PERFORMANCE WAS SO COOL AND I WANTED TO CRY. IT WAS SO AWESOME. Seriously. My friends told me that when one performer was doing acts with a flaming hula hoop, my eyes were huge and my mouth was hung open the entire time. I totally believe them because IT WAS SO AWESOMELY AMAZING. Then one performer BREATHED FIRE. Ahhhh, I had been looking forward to that all day and that surpassed all of my expectations. 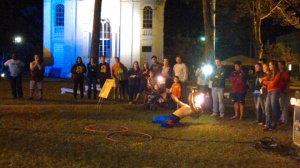 The music was really good too. Throughout the day, there were various bands and singers performing, including Erskine’s own Choraleers and Gospel Choir. In my opinion, the last band, The Fantastic Shakers, was the best. The musicians alternated between old, jazzy songs and more current, popular songs. It was a lot of fun to dance to, but I got so tired out!

Most birthday parties just have cake, a few friends, and gifts. This birthday party blew all other parties out of the window. Way to go, Erskine! I can’t wait until your 200th birthday!

The inside of the Erskine Tower was covered in student signatures dating back to the early 1900s.

For those of you who are opposed to attending Erskine because you’ll be bored out of your mind, let me just tell you something. There is always something to do here, as long as you have the motivation to find it. Now, if you have been dutifully reading my previous blogs, you know that I rarely have free time to do anything. One thing I do try to make time for every day is exercise, because I’m terrified of that freshman 15. Free, unlimited vanilla ice cream definitely threatens my resolution to weigh the same at the end of the year as I did when I started school. Thus, every day, Grace (see God’s Gift of Grace) and I drag (sometimes we literally drag) our friend Daria to a fitness room in the women’s dorm adjacent to ours, and we exercise for an hour. We use weight machines, treadmills, ellipticals, a funny looking ab doodad, dumbbells, and even some kind of foam yoga mat. We’re basically female versions of Chuck Norris.

Get on our level.

Back to the point, along with exercising with my friends, I also joined a rock climbing club here. Membership only cost $10, which was my main motivation to join. I’m definitely not super strong or flexible, but I can scale up some of the easier walls without too much trouble. Tonight, I actually conquered one of the routes that was one of my projects. I think I’m at a disadvantage because I’m super short and I can’t reach the rocks that other people with normal heights can reach. But I do have a friend who’s super amazing at climbing! Her name is Darby and I look up to her so much because she is so intensely amazing! She’s tiny, but she’s so strong and tough.  I secretly think of her whenever I need the motivation to not give up when I get tired or frustrated.

Darby likes to come down Spidey-style. 🙂

I have really enjoyed the rock climbing club because it has pushed me to make a bunch of friends that I probably wouldn’t normally even talk to. The leaders of the club were so inviting and encouraging, that I was ready to become a member regardless of whether I could actually make it up a wall or not. I have really loved getting to know them and I have also loved improving my climbing skills. I like to think that rock climbing is a practical, hands-on application of the muscles that I build when I work out in the exercise room. I can tell that I’m able to push myself a little bit more on the walls, each time that I go.

Here’s how this blog relates to you: whether you’re in high school, in college, or in whatever prime of life that you think you are, GET INVOLVED! Find things that you enjoy and make awesome memories by doing them! Don’t make the excuse that you never have time… because you might just be doing something that you hate or you’re just too lazy to start something. If the former is true, then you should just stop doing it. Obviously, you can’t skip out on important things like working or cleaning. But if you’re in a knitting club, but you hate knitting, then leave the club! Find something else that will make you happy. If the latter is true, then I feel bad for you. Because if you’re going to let your laziness get in the way of your happiness, then.. you’re just worthy of pity. Get off your potato-chip-covered couch, smooth out the 10-inch, potato-shaped indent, and cross something off your bucket list!

Want to see some pictures of my cool rock climbing pals? 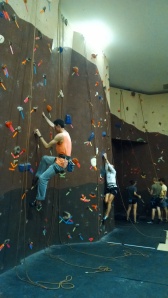